Kanyeezee you (kinda) did it again 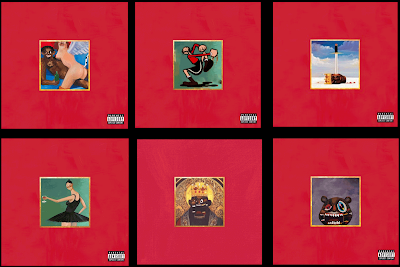 Well the problem is that you already heard the whole thing if you've been listening to the "g.o.o.d. music" series of releases which the interrupter has been dropping for the last 3 months. For me this was a bit of a disappointment as I typically look forward to hearing new music when I listen to a new cd...I expect too much. It officially drops the 22nd but there has been a clean pre-release with decent audio quality (hey its rap music who cares anyways right ???)

Regardless, the thing is very good. For the people who liked his weirdo self-directed runaway opus (really...if you haven't seen this yet shame on you it's really cool) Of course I have a friend who maintains he ripped off classic painting and performance for literally every scene...maybe I'll let him do a guest blog where he breaks it down.

I was surprised and excited that with the exception of the veritable crooner "lost in the world" this album is not another 808s and heartbreak (yes I was wrong if you were keeping track). Strange that this album is LESS RnB and has features from Dwele, John Legend, and Kid Cudi's pseudo-singing ass. It doesn't really belong in the college dropout/late registration/graduation progression either though. No, this is a unique release from one of the best rappers in the game, at near the top of his game, with some of the best features I've seen on a rap cd.

That's the overview. The sound is rarely chipmunk soul (devil in a new dress is the exception), its kanye doing original production using a ton of strings (cello on like every track) and piano. The samples he does use are creative and exciting (the beatles on power, and most of the concepts are only moderately played out ("all of the lights" reminds me a little of "flashing lights" just a few years ago...) Some of the highlights are "Hell of a Life" which has a distorted synth bass that introduces the track by itself, a catchy hook with kanye singing, and non-flashy, but dope drums, and some decent arpeggiated synth work (which can sometimes drag behind the beat and make me angry). Having sex with the lights on is a theme on this cd...I'm not mad. Basick told me this song is about cocaine... Kanye sings: "fell in love in the bathroom and got divorced by the end of the night" and then we hear him breathing heavily mostly in through his nose... Yeah we'll let you make up your own minds.


Some of the things that suck are the track monster feels like it was recorded separately in many locations and pieced together by kanye. The track so appalled has a very familiar feeling probably because of the played out distorted "oh" sound throughout. Pusha t's verse is weak on that track too...rza comes out way too loud haha I could just listen and talk smack all day. Is he gonna rap???? Or just say "ri dick a lis" over and over. Swizz Beatz also sounds like he's about to go to sleep and his vocals get cut off by whoever arranged the track...so...I guess I don't like that song. Also this cd is a little long...there are many a dragging track and a few throwaway verses (most aren't kanye's...)

"Yeezy reupholstered my pussy" is what I'm going to call the funny Chris Rock skit at the end of blame game.


and So appalled so you know what I was bitching about...

Also if you want to read how hard rolling stone is on yeezy's nuts (they say nothing negative in their review. Nothing.)
Email Post
Labels: chris rock hell of a life kanye west my beautiful dark twisted fantasy rolling stone so appalled