Has anyone else noticed a lot of really happy music being made lately? I'm not talking about the sound of pop music, (90s pop house with pitbull or lil jon screaming over the top) I'm talking about the LYRICS. In order to understand this trend we will go back to a time when music was great and think about how we've done coping with its loss.

In the 70s there was really great music being made. The flower children baby boomers, struggling for equality and peace in the 1960s, finally got jobs and ushered in a new era of technology, new opportunities for minorities and women, and prosperity. While mainstreamers like Bob Marley, Stevie Wonder, Fleetwood Mac, Pink Floyd, and Led Zeppelin built on themes established in the 1960s it was the experimental music driven by new technology including the first microprocessor, the popularization of modular synths such as the minimoog, and Technics 1200 series turntables which allowed some of the really great music of this decade to come to fruition.

Clearly the birth of hip hop music at the end of the decade was its greatest gift. For other examples of music from this era which make me extremely happy check out the beatelectric blog

The discos closed, and in some cases, the records burned (I'm tearing up now thinking about all of the precious vinyl which may have been lost that day.) 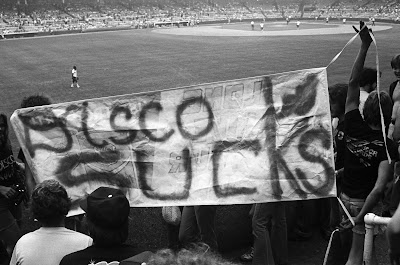 The grief which America experienced began with the great denial of the 1980s. This refusal to acknowledge the great loss of the funk and disco of the 70s was exemplified by senseless rock music.

here are some examples of the deep thinking which was going on:


And the first mashup I know of, proving once and for all that they are officially no longer cool (see my review of All Day)

After the great denial of the 80s came the next stage of coping for the loss of good music in the 90s: Self loathing, or depression. This stage of grief was great for music allowing for totally new developments, especially in rock.

yes I love the 90s and could go for days.

The next stage of grief according to Kubler Ross would be Acceptance but as is now well known these stages do not always go in order. I personally feel because we skipped past anger in the 80s and 90s it came home to roost with a vengeance in the naughts (2000 - 2010)

Of course we couldn't be angry for ever. Eventually one has to recognize that music changes, styles recycle, and the earth is whole again. The new thing in 2010/11 seems to be positivity. Tell the kids they're going to all grow up to be the president and they're perfect just the way they are. Of course we wouldn't want to lie to them and say it's actually a series of dead end jobs and nightshifts leading to a dark pit in the earth. The main artists I see embracing this trend are bruno mars, lady gaga, and katy perry.

BORN THIS WAY. Perhaps this one requires an entire blog post of its own. The funniest is the comment on the video "This song is patronizing to gay people." Aside from the uberpositive lyrics, the music feels a little too familiar. They even add in some out of place distortion in the bass line in the beginning to try to keep it relevant. Britney wins this one.


and my favorite firework boob shooter:

I understand that my thesis is paper-thin. I do not actually believe any pop musicians are grieving (as I am) for the music of the 70s. I do however think it's an interesting way to compare some of the music and ideas which were around during these decades.