Femme Fatale vs. Born this Way 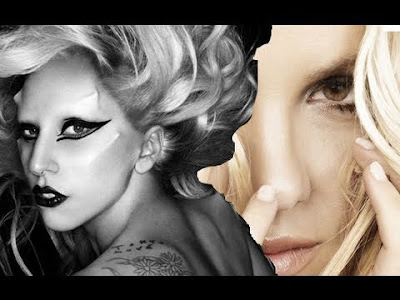 These two albums. I'm going to listen to them one more time. Just for you. Because I care.

Yes I am a big fan of both of the musicians. Even if you hate Lady Gaga for personally destroying pop music you have to acknowledge the force she has been for good. She is a champion for the causes of the gay/transgender community (although their must be some who regret having her as their spokesperson 24/7). She also has made some fantastic records including Just Dance, Telephone, and Bad Romance. Britney on the other hand would be the musical incumbent with over 12 years in the game (no I'm not counting the mickey mouse club) and all kinds of crazy records like the soundscan record for debut album sales by a solo artist and most albums sold by a teen artist. Here's Britney at her visual peak performing a song which could be argued is so much a part of the American sound consciousness it has lost all meaning. I never picked up the Titanic reference until just now:

While Britney uses Femme Fatale to continue her nack for fitting into the status quo and delivering a package which people will be able to recognize as pop music, Gaga tries to outshine the world but fails to do so, ultimately disappointing with a barrage of showtunes and no on-stage action to take my mind off of the multiple musical failings.

There are albums which sound tailored to performance which I like. The Eminem Show is one of these. However, there are so many different problems with this record. This sounds to me like whoever had Stefanie chained to the mic chain before has been slacking and may have allowed her some freedom to annoy the crap out of me in new ways. These annoyances come predominantly in the form of bad solos and voiceovers, but have been known to manifest as lyrical/pronunciation/pitch/timbre nuances which make me upset as well. I'd rather listen to Nicki Minaj's joint. But I'd really rather listen to Britney's. For every problem I find with Gaga's album, I find something I love about Britney's.

Productionwise Gaga takes fewer risks delivering what is essentially a house album with one country song, while Spears experimented so much with her selections we nearly had a Rusko track on the thing (we can only hope this collaboration comes to fruition in the near future).

Once you skip through the first two tracks which you've already heard, you are taken to the fierce, distorted crunch and sultry vocal stylings of a diva at the top of her game on "inside out." I really think this album has Britney's voice the least effected it has ever been, somehow I believe this is "her" more than on Circus.

Once you reach the end of this dubstep-esque cruncher you will immediately be treated to what I think is one of the two best dance tracks in "I wanna go." The voice-overs on this one are as tasteful as they are problematic on ALL of Born This Way. The dynamic in this song is lovely and really propels you through.

Following one of the best dance tracks comes one of the best from a song-writing perspective. The LFO is fierce and at 73 BPM it's just itching for a dubstep remix. A quick search of hypem.com reveals about 6 remixes, none of which are dubstep, and only one of which is good: Britney Spears - I Wanna Go (Oliver Remix) (Official) by weareoliver
This Beautiful song doesn't really do anything for me. I'm a little worn out of the epic breakdowns at this point and the chorus is a little uninspired. However, it's been conveniently sandwiched in the middle of some really fantastic work and features rapping (!) from Sabi which is...fine. This Seal it with a Kiss has wobbles which are not well received by my dj headphones but I remember it being a good time. This track is equally uninspired as beautiful. This one really helps out a argument against this album as merely a bad attempt at combining dubstep sounds and pop stylings. Now. Please don't think I am giving Britney any of the credit for the game-changing sound of Femme Fatale. If you want evidence she just thought she was singing over another pop album read this Rolling Stone Interview with her from March. The closest she gets to even referring to Dubstep is when she describes the album as "Darker" (She mentions Deadmau5 but not one legitimate dubstep producer).

Thankfully there are more good tracks on here, starting with "Trouble for Me," which features a mimicd lead/vocal lead in to the chorus which almost works. It is followed by what sounds like a shitty cover of Shakira's "She Wolf" J/K this is wack though. If there are any misspellings in this sentence it's because I'm dancing to Britney's Gasoline. This is really catchy and fun. The synths are kind of stock but it can't keep from enjoying this one. Now I'm watching Michael Jackson's Smooth Criminal because Fiona Apples' and Eminem's both breed discussions which are too long, and crying because I will never see the king personally.

I'm going to stop now. I've posted my notes below. Thanks for reading and more of my own pictures next time. Promise.

Marry the Night:
This is a pretty intro.
Born this Way:
You heard this one. I'm not a huge fan. It sounds to me like a bad showtune.
Government Hooker:
When I first heard this beat I got really excited. The distorted synth bass is a welcome addition, but gaga finds a way to make it unlistenable, by essentially making a song lyrically which sounds to me like it is making fun of good music. It's basically a joke when this russian voiced man comes in to echo her on the chorus.
Judas:
You heard this one as well. I'm not really a fan. I think this sounds like a showtune as well. Her voiceovers are pretty good.
Americano:
Not only is there already an excellent song called No Speak Americano, there is a song called America by Rammstein which the chorus on this one reminds me of a little. Melodically this song stands on as much ground as the OJ simpson defense. I do think it's cool to do non-traditional pop music on a decidedly pop cd (this sounds a little like an overproduced gogol bordello song with it's lilting, catchy tune and gypsy guitar) Unfortunately...it sounds like a show tune.
Hair:
seriously? with the horn? and the cheap synth? I almost fell asleep during the first verse. This idea is also a little played out.
Sheisse:
This song is really unlistenable this is painful.
Bloody Mary:
This song is the breaking point. This woman has finally managed to offend even me, the least religious person on the planet. THIS ISN'T TASTEFUL! "dance with my hands over my head like jesus said" is the chorus. My point is made.
Black Jesus-Amen Fashion:
I see this track title and imagine just frisbeeing the cd out the window at this point. Even without the title, there is a breakdown in this song which is just bad. She easily could have done a second take on a lot of these tracks. This "showtunes" style is the equivalent to me of a mixtape in rap.
Bad Kids:
Can you imagine selecting this beat? I think if it were the last one on earth I wouldn't sing over it.

This is getting carried away. If you really want to listen to this thing go for it but I thoroughly dislike it. In a hateful way. In a you are killing music lady way.


Inside Out - Crunchy, Lovely, INCREDIBLE CHORUS the solo at the 2:46 mark is especially delightful.
I Wanna Go - I love all the vocal looping and glitching and pitching they do on this album. It never sucks.
How I Roll - Wow! This sounds like 2020
Beautiful through big fat bass - I hate all of these songs. They sound like pop filler to me. Damn it I wanted this thing to be perfect.
Trouble for Me - Another anthem, but not really ready to be a worldwide hit. There's lots of panning on these keys...
Trip to your heart - I could listen to this maybe if it weren't for the egregious appropriation of the melody from Shakira's "She Wolf"
Gasoline - I hate Britney's little spoken bits and the breakdown for this one also doesn't really do it for me. If she tells me to set her on fire again I may appease her.