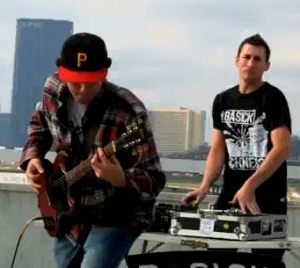 This is an interview recently conducted with local hip hop/rock superstar/band Basick Sickness for DJ MG's BLOG as well as reppghhiphop.com

Because of our intimate association with the subject matter at hand we give you the scoop first:

What are your earliest memories of music you enjoyed when you were growing up?

My first concert was Michael Jackson. My first casette was Public Enemy. My first CD was Aerosmith - Get a Grip. First record was the McDonalds Menu Rap (http://www.youtube.com/watch?v=da7LMVB68j8). I remember breaking my dad's electric guitar and rocking out to my grandpaps accordion. My grandfather was in a band with his four brothers called the 4 Aces. I have also always loved rock and rap.

When did you decide you wanted to be more than a listener and become a performer?

I got my first guitar when i was in 5th grade. The change really came when I worked at Starlake Ampitheatre around the same time and saw so many live concerts, every genre. I was hooked. I started writing lyrics in 9th grade.


Your music does not easily fit into traditional categories, how would you describe yourself as an artist?

Creative. eclectic. diverse. great. Obsessed with many different acts and arts. Thats why my music is accepted by different genres and also why I have my hand in so many different creative outlets.


Your group is comprised of yourself, Joe Palermo and Isaac Goldszer (DJ B-Tips), can you explain the roles you play to form Basick Sickness?

I am the captain of the ship and the story of Joe and I go back to the 4th grade. We had a band back then, he moved away, came back like 4 years later and it was like we never missed a beat. Joe is the man behind the boards. We pride ourselves on doing EVERYTHING ourselves: creating, recording, mixing and mastering. We paid for studio time once... he is extremely talented with mixing and mastering, he is a beast on the drums and with programming. He used to be the hype man when we did hip-hop shows and he ususally pukes before every performance. B-Tips (slips) is the DJ and a late edition to the group. From the jump he came in as the DJ for the hip-hop performances, but I had bigger plans for him from the first time we met (we had a hit radio show on WPTS - "The Pre-game Show" for over two years) - for him to DJ in the full band. He is a very very talented DJ and total artist in his own rite. B-Tips writes (better than some local rappers) and can play a few instruments himself. We also have a guitar player,Rick Topping, who plays with us occasionally for live shows. As I previously said, his role is guitar and backing vocals.


What are some personal goals of yours at the moment?


Do you feel that Pittsburgh is a place that you can grow as a musician and achieve your goals?

Of course and if not, than it wasnt meant to be. I love everything about Pittsburgh.


If you could change something within the music industry, what would it be?

Not so much the industry, just my position in it. Labels are afraid to take and sign great acts because they dont have 1,000,000 YouTube hits.


What was your most fulfilling moment(s) in music thus far?

Opening for acts that I look up to. Stage diving at one of my own shows. Performing for thousands of people and making music that i like to listen to and feel proud of.


Tell us about your new music that you’re working on.

We are about to release a new EP called, "Before It's Too Late". The whole EP has all live drums, guitars, and bass. Its rowdy as hell. It will be on my twitter, facebook, myspace, and i'm sure the links will be everywhere. I hate over promotion, but yes this will be everywhere. Should be out first week of October, but we'll see... I always write, even when not making new music or recording, but at the moment we are really in a good place creatively and I do not want to stop.