The Best of the Burgh - Rap Edition 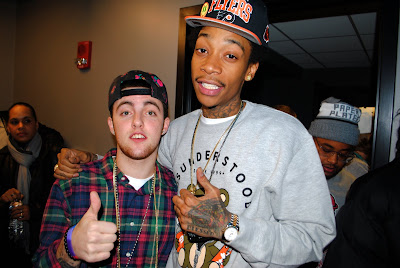 Everybody knows it. Some may be reluctant to admit it. Wiz and Mac have this town on lock when it comes to the hip hop game. We would need to bring a whole different tier into play to even discuss anyone else.

Recently both have releases which deserve serious consideration. Wiz' debut LP Rolling Papers drops in less than a week, and Best Day Ever, Mac's new mixtape was released March 11th. I expect the records will have serious similarities; relatively few features, sparse sounding, dreamy beats, and with no exceptions, straightforward hip hop production. With very few acoustic instruments Wiz's Fly Solo is an exception and a notably dope track. BPM's will not stray more than 10% of 90 throughout (Wiz' Too Short colab again, is an exception). Not to get it twisted, the production will be tight on both projects, with very consistent sounding, cogent themes, and lots of room for the rappers to shine.

Basically the two talk about getting famous, what changes they've made in their lives since getting famous, people who don't like the fact that they're famous, and all of the marijuana they consume now that they're famous. Again, I'm not mad at this either. One of the best things about these two is that they keep it real. Wiz isn't talking about all of his guns, hoes, or Lamborghini's because he doesn't possess these things. Ditto for Mac. I'm very proud to be making music in the same city as these two and hope that Rolling papers goes platinum and Mac Miller gets signed to Def Jam or wherever he wants.

I'll leave you with my favorite track so far from each album. And a few words about it.


ID labs maybe should get an award for making these two sound amazing on hooks. Wiz even gets hooks on tracks he doesn't rap on now! (his "Feature" on Best Day Ever for example). This track specifically speaks to me, not only because I'm Jewish and like pop music, but because of the immediately recognizable and understandable content, the linear storytelling, and creative wordplay.