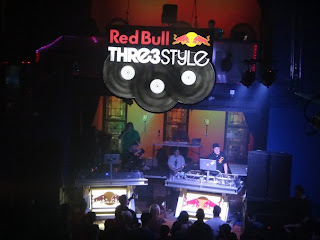 Well the outcome wasn't what I was hoping for, but the event was amazing overall and I saw a lot of things from people that I was really blown away by. This competition does a great job of separating really great dj's from amateurs, and it gives you just the right amount of time to tell the difference.

Let me say right from the outset, that the Champion was crowned appropriately. Even without literally the entire audience rooting for him, and his impressive confetti gun, Petey C absolutely stole the show. His track selection, on stage antics and showmanship, juggling, and especially a mini set where he looped the words "notorious B I G" and ran through banger after banger of intstrumentals the King of NY rapped over in his prime totally pushed him above the rest of the competition. The first half of his set had me extra worried because it was loosely party themed (he played part of the bounce acapella I was planning on dropping also).

THE LONG-AWAITED CHAMPIONSHIP SET IN ITS ENTIRETY THANK YOU TO PETEY C AND ANTUKS!

Thanks again to redbull for having me, and everyone for coming out and supporting. If I learned anything it was that pirate city supports their own like nobody's business. PROPS!
Email Post