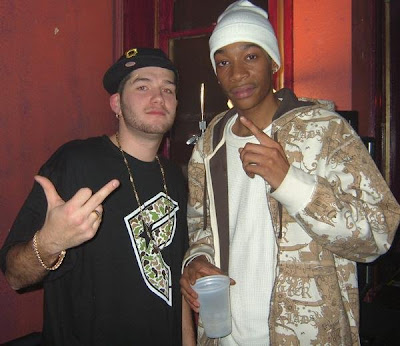 A broken branch is a symbol of loss, of something which we once had slipping out of our reach. As Winter beckons I break you off with some fresh new hip hop. Blender (follow: @BLENDER412) and Basick pair up with one of the leaders of the Pittsburgh metal scene (P)Rick of Blackmarket Bodyparts on this HUGE track off the "Broken Branch" E.P. released yesterday independently.

This was the least hip-hop sounding of the tracks on the EP, definitely showing this Pittsburgh stand-out's growth since "Before It's Too Late" (Junior EP). Actually this album channels his Freshman release "The Sickness Is Spreading," coming with even more multi's and punch lines, but staying true to the studio-sounding relatively straightforward hip-hop beats and sometimes repetitive hooks.

Maybe the best decision on this project was the inclusion of previously obscure Pittsburgh rapper Blender. This is the guy to watch for right now. While he doesn't deliver his lines with the seemingly unlimited energy of Basick, his lyrical prowess might be unmatched in his city. If you want a comparison, the first thought goes to Yellawolf but this guy is even grimier. Yeah. Like Yellawolf vs. the Smut Peddlers or some shit.

Keep listening for more stuff from these two, obviously this taste has just left me hungry for more and when it comes to GOOD hip hop...I'm a ravenous fool