Thanks to a relatively mild Winter night in Brooklyn, a fantastic venue, a healthy partnership with the other members of Famous NYC, the bands that were super professional and came to play, and all of you for coming out - Famous Hill - my production company's first show at a public venue - was a resounding success.

PHONE TAG
When I heard that everyone was getting paid - I wasn't sure how it was possible.  The place was packed though.  The hip hop groups in particular did a great job filling the space, but what really impressed me was how long people stayed.  Some of my most memorable moments in no particular order after the jump:

4) Getting people to sign the flyer (see picture below)

5) Datalog's set - the video in particular

8) Drinks afterwords with Audiofemme and the Famous Crew. 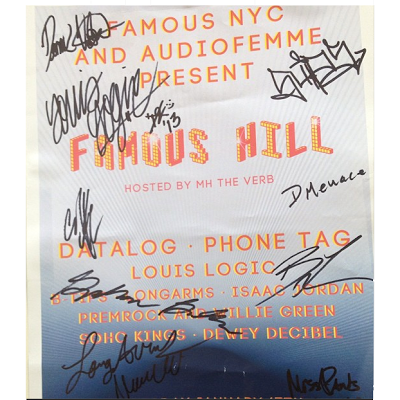