Thievery set up with two full drum kits and at least two other band members focused on percussion. I left my stuff with the girls, swam to the front, and found my friends. Then we cleared enough space for a dance circle and went to town.

This ensemble from Brooklyn has taken over the world as a result of their tight harmonies.  Melody is king and they have bloc-party-esque guitars to guide the way.

Here is their performance of 2080 (complete with those harmonies!) from Governors ball 2013:

The UK don't play. Bloc Party is one of the tightest-rehearsed bands I've seen and makes really complex song structure and melody sound effortless.  They also had the best lighting for pictures so I'm giving one of my pics instead of a random youtube video: 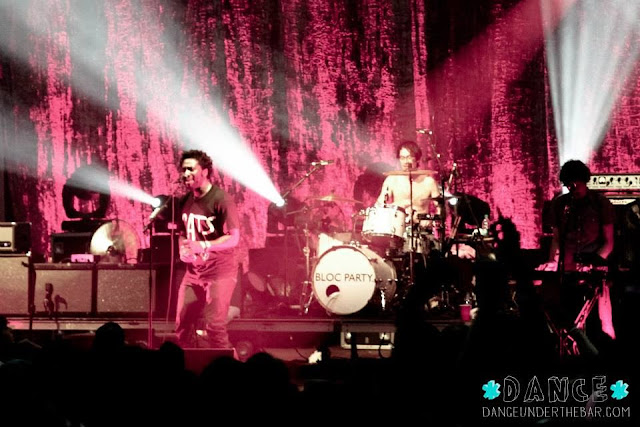 (Hit the Jump for the rest of my Awards and my full Gov Ball writeup!)


I've been trying to catch Kendrick live since missing his pre-m.a.d.d. city set at Bonnaroo last year. He did a cool job playing hits, not using backtracks, having a band that didn't suck, but his production (set design, lighting, etc.) didn't blow me away.

Last time I saw Nas, Wiz Khalifa was an unheard of rapper that opened for him and stole the spotlight on the first stop of the "hip hop is dead" tour in Pittsburgh, PA.  At that show in 2005 Nas was overweight, underpracticed, and unimpressive. Gov Ball redeemed Nas for me in a lot of ways and yet left me wondering about his status as one of the GOATS.  His encore, the wistful (for Kelis) "bye baby" hit especially hard.  Here is performing it at a different concert recently - you get the idea.

Very few mistakes with this set. The new, even more minimal sound with no strings on stage, and literally no guest features feels bare and powerful.  Kanye talks about how his fashion has become less loud and in your face, and the music has followed suit in many ways.  The highlight here was a 9 minute heartless rendition which came back in 5 times with "the coldest story."


And as a bonus here are some detailed words about day 1 I wrote for a previous iteration of this post.

This was pretty much a washout.  When I left Erykah for Pretty Lights in the deluge and discovered not only had it been canceled but the entire festival (Kings of Leon) was offline for the night.

Still Friday for me was the most attractive schedule with Dillon Francis, TEED, Crystal Castles and Erykah Badu all taking the stage before the theoretical sunset, so I was going hell or high water.  The rivers were elevated.  We discovered a Kangol bus which provided some respite, and which basically became de facto VIP by the end of the festival.

My festival began with Totally Enormous Extinct Dinosaurs - whom I had seen just two weeks previously in Detroit.  Still this is a show that is not to be missed, and despite somewhat limited production with little lights in threes that provide a bit of drama and some fog there is still a ton of cool here to touch upon.  The singing alone makes this worth checking out, add to that some talented dancers and a sparkly cape (which according to Alex English he won't even take off on the plane), and you have the stuff that makes up really legendary performance. For some great pics of TEED check out my Photos from DEMF.

Dillon gave an excellent show for my first time seeing him on the CDJs.  He played all hits, many of which were his remixes or other tracks from the Mad Decent family such as Major Lazer's "Watch Out for This." The crowd was energized despite the rain, and his set design and costume were elegant - giant blow up cats with the words "FUCK!" written in black and white and Dillon in a clean black suit and white shirt with a skinny black tie and clean-cut gelled hair.  I was hoping there would be Taco Bell thrown at me A La PCU but it didn't pan out. 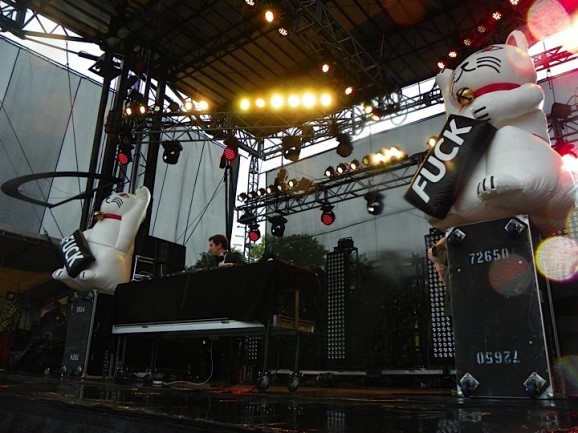 
By the time Dillon's set was wrapping up and we were heading for CC, we were completely drenched.  Also my boots had water in them and I was taking notes about these sets on an actual pad of paper because all of my electronics were inside a plastic bag.  I watched Crystal Castles from the Kangol bus and was impressed with how perfect the music was for the mood of the festival.  10,000 slightly drunk and angry and wet and horny New Yorkers (some for the day) moving together to the stripped down and aggressive electronic sound of Ethan and Alice.

Feist was canceled but I didn't have a clue because I was sheltering in the Kangol bus and trying to stay warm.  Tropical Storm Andrea brought frigid Winter-style temperatures in addition to the foot or so of rain.  I was focused on getting under the tent for Erykah Badu.  She came out in an enormous blue hat with a small army of musicians behind her.  The "Cannabanoids" (great name) are apparently a full band supplemented with about 4 DJs/ Live production units and a small Apple store of gear on stage.  While the levels certainly were all over the place (random drum kit/rude synth comes in and takes over song periodically) and Erykah was sometimes more, sometimes less on key, this was easily one of the highlights of my festival.