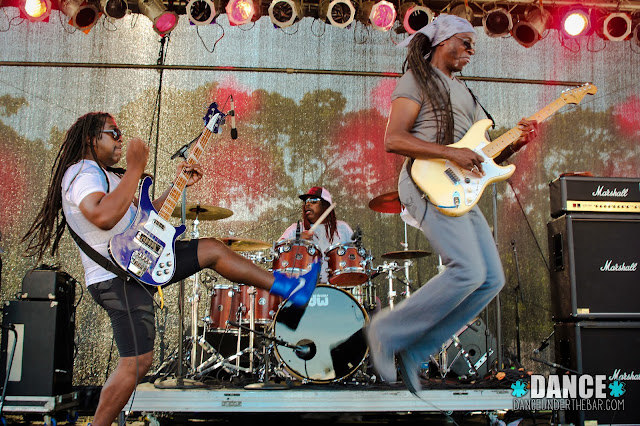 Detroit was repping hard at Afropunk on day 2!

Death is a band from Detroit that I was acquainted with through my interaction with Carleton Gholz of the Detroit Sound Conservancy. Carleton posted he was interviewing this band, I got intrigued, watched a documentary about them - very interesting story - basically they saw The Who, and started making punk music in Detroit in the 70s. It was novel not just because they were black, but because the sound was so raw and innovative at the time.

They still sound great! The guitar was cleaner than I expected and the bass was just boomy enough and rich and funky. Also they were loose enough to sound like punk but tight enough to show their age. I was gifted with a VIP pass from Grolsch (thank you!) and so I got in the pit to take a few pics. above is one of my favorites but as always:

SEE ALL OF THE PICS FROM AFROPUNK DAY 2 INCLUDING DEATH, K-OS, DANNY BROWN, CHUCK D and QUESTLOVE'

My day started with k-os of Toronto. This dude has been hustling since the 90s and has found some success on the festival circuit with his live-banded positive message hip-hop reggae vibe. I enjoyed his set and thought his band was one of the tightest I saw at Afropunk - they actually sounded like they had practiced a few times and people took turns soloing etc. 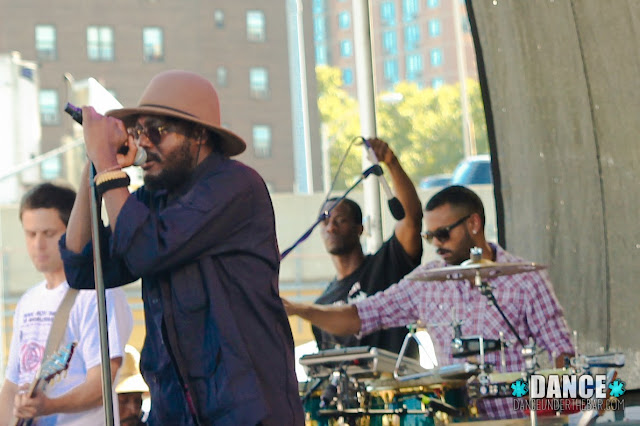 After Death was decomposition - just kidding it was Danny Brown - also from my hometown! Danny Brown is a rad dude and I always go back to the time I saw him in 2009 at the Shelter of 8 mile fame. He had dreadlocks back then and just sounded like any other rapper - when he got some personality he blew up! Honestly his rapping was always good - but this example will show you how important image is to success in music. ITS EVERYTHING.

Danny in 2009 vs. 2013: HIT THE JUMP FOR THIS SUPER EXCLUSIVE PHOTO OF DANNY IN 2009 WEARING JEANS AND A SWEATER WITH DREADS AND CHEAP SUNGLASSES!!!!! 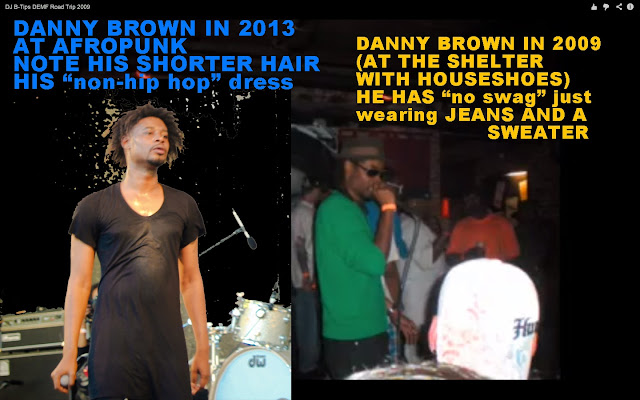 Danny's set started the same way as when I saw him at Bonnaroo two years ago - with his DJ dropping some bass and then going into Wit It. Then he played Bitch I Will, which is a song about eating vagina.  It's similar in a lot of ways to another Detroit rapper - Kid Rock's "yo-da-lin in the valley"      A friend remarked he wished there was more musical element to the set - its just Danny and his DJ - who really just drops tracks and doesn't scratch or add much in the way of vocals - but I think it's pretty hip hop.  Danny has personality - he climbed down into the photo pit and got the crowd pumped during one of his last tracks - and ended his set by proclaiming his love for marijuana and suggesting he would be mingling with the audience afterword. 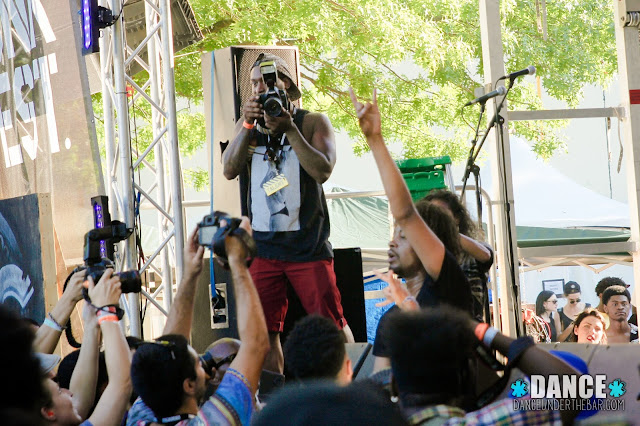 The Red stage was running about 30 minutes late on day 2 which was annoying so I got to Freedia during her encore and only snapped a few photos. She looked fabulous as always and definitely was shaking it. Here she is taking a bow after her set with some of the co-divas also pictured. 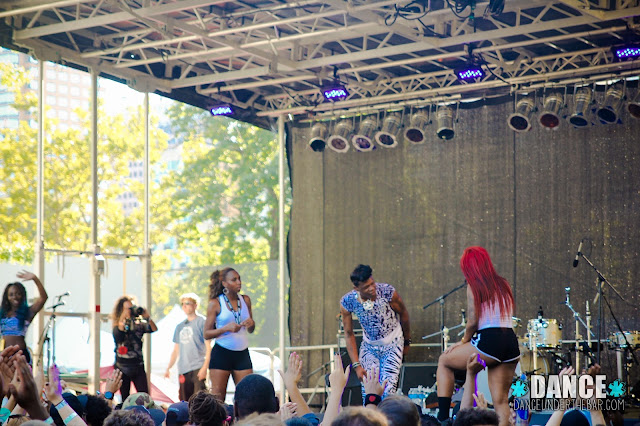 Ninjasonik rocked on the Red stage after Freedia which was a nice surprise.  They were the only group I saw with a serious mosh pit - although Roofeo also had the crowd turnt nicely with a combination of 2 Chainz, Asap Ferg, and other current hood anthems.  Ninjasonik actually sounded like what "afropunk" would be if it were a genre.  I would argue the CX Kidtronik guest set at the end of day 1, death and ninjasonik came closest to representing that punk vibe at the festival.  Ben Robey smashed his mouth on something and was bleeding - and then they brought up like the whole hood for the last two tracks. I'm posting the split lip pic cause I like blood but definitely check ALL PICS for the posse shots cause there's a girl doing the stanky leg with a walking cast on and that's just cool.  Also Telli (Left - with shirt over head) has the ill warriors tat. 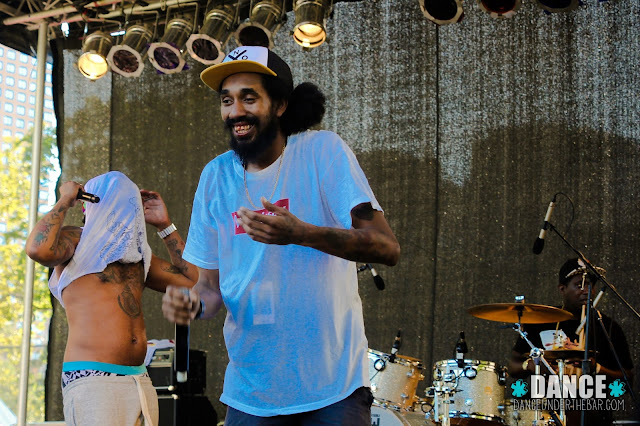 After Ninjasonik it was all about Chuck D - the legend - of Public Enemy.

ALL THOSE FAINT OF HEART TURN BACK NOW I'M GOING TO SHATTER SOME DREAMS.

but first I have to talk about Roofeeo.  This dude got like 5 sets on day 2 - basically like a house DJ for Afropunk.  I think that's great but - he played "2 Chainz - Yall Ain't" right after Big Freedia got off stage - which includes a line: There's no Ru Paul it's no Gay Shit - basically textbook homophobia - and the stage he was playing on was definitely the most gay of the two stages.  It was the weird stage - the kid stage - and the gay stage - especially with Freedia up top.  Still this dude went in - the biggest tracks were Asap Ferg - Shabba and Jay-Z ft. Rick Ross - FuckwithmeyouknowIgotit

First watch the video I shot of Chuck D and make your mind up for yourself but I'm going to explain the good and the bad with this set.


Chuck D is old. We all know this. His albums are noisy. That's fine. But this band "2 Much Posse" or whatever, just doesn't sound very well rehearsed.  It confused me also that Chuck D - someone who I would expect to appeal to a somewhat more mature audience - was put on the "kids stage" - basically the spot where kids went throughout the two-day festival to "turn-up" and "wile out" to the sounds of Roofeeo and other electro/rap/bounce artists such as Ninjasonik, Danny Brown, and Big Freedia.

Still once I saw him on stage it made more sense than I thought for him to be on the "gay" stage - He "switches" a lot on stage - he also has some strange interactions with the guitarist - occasionally bumping into him or almost dancing with him - and then he did this little move where he throws the mic up in the air about 10 feet, catches it, and then dances with it like its a sword, while doing this face that looks like he is making out with a pole.  It's honestly wonderful it's just really unexpected.

Regardless his set didn't go over screamingly because it took FOREVER for him to get off a song.  His set went twice as long as it was supposed to - undoubtedly because of his five or 6 five minute rants.  HE EVEN HAS THE RANTS PLANNED ON THE SETLIST which I photographed.

Also Chuck doesn't really ride the beat that well.  He kind of wanders around the beat and it is really tough to listen to the live band while every instrument is soloing and chuck is trying to find the beat. It almost seems like he is losing his hearing a little.

Yup.  It's true.  During one of the rants he started burning symbols of his delusional paranoia hip hop world including hot 97 and rolling stone magazine, and a pair of white nike's that are now in my room.  Thanks Chuck!

And don't get me wrong I believe in educating people with your music! I just think there's a time and a place.

The night ended with ?uestlove.

His style is very smooth and his timing is impeccable with his background in the rhythm section. I also love how he keeps it moving - doesn't play tracks too long - works well with my ADD.

He played the Ann Peebles into Missy can't stand the rain, he found the sample for "throw some D's" and played the Kanye remix about paying for plastic surgery for a girlfriend. He built  the sample for Common Testify live from Honey Cone.   He has really gotten good at using the turntables to build hip hop songs live from original samples - the cue points in serato help with this a lot.  If you've never seen Quest DJ - he plays with both turntables on the left and the mixer on the right.  He played the sample for "Don't wanna be a player" and built the beat for "The People" live. I feel like this last one should have had people losing there minds but - it didn't really hit as hard as I would expect. My theory here is that it's because Quest plays soooo much in Brooklyn.  Does this mean he wasn't an excellent choice to close out the festival? Hell no. I thought it was perfect.  To close he played Dilla - Workinonit - WITHOUT the black thought raps.  In fact I didn't hear any black thought - or Roots - cuts in his set.  Also I felt the MC could have been a little louder/more vocal - but that's just a personal taste thing.

Thanks for reading this long post and keep informed by subscribing and write me and send me music and come to my shows! HEARTS 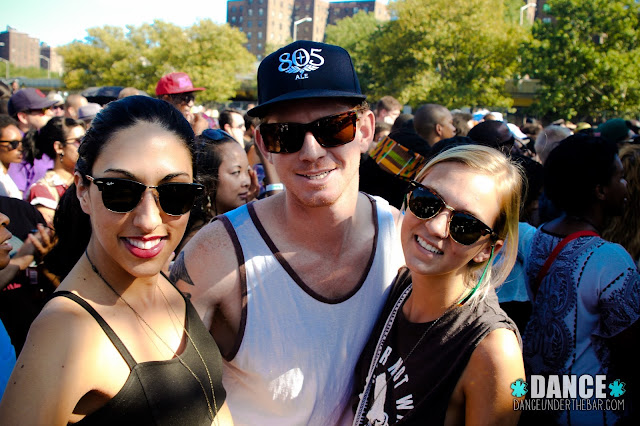 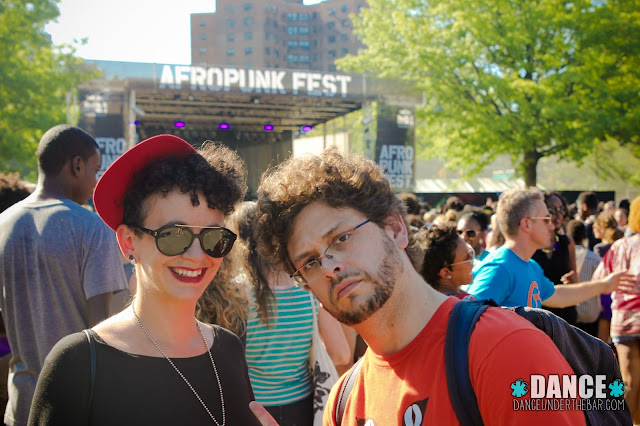 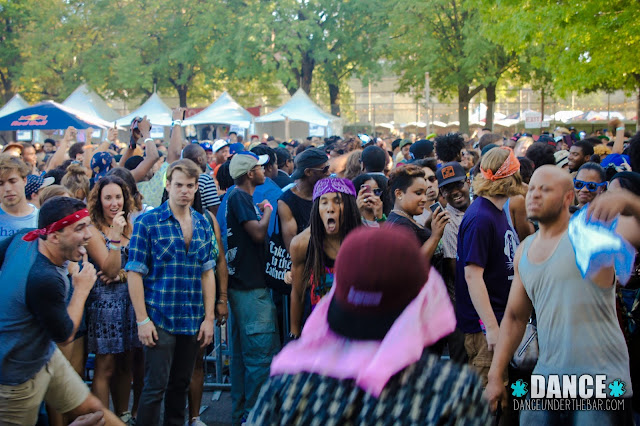 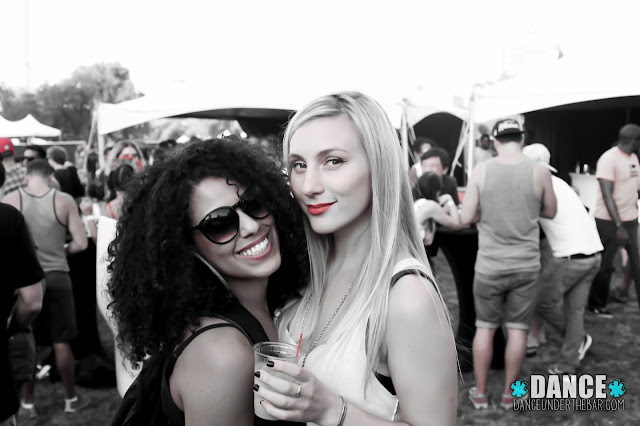